Our fate presents us with many surprises. But if you want to see some, you need to take a chance and play Russian roulette with fate itself. You don't know what might happen if you're unlucky. This unknown sometimes scares you. And after some thoughts, we retreat. What could have happened remains a mystery. Sometimes, we quickly forget it, and sometimes this question lives with us for many years. And when we think back over and over we ask it, “What if I did ...?” Everyone has the own "if", but all are united to some extent by regret for the missed, the desire about returning and making a different choice. I was inside of the same situation in Florence. 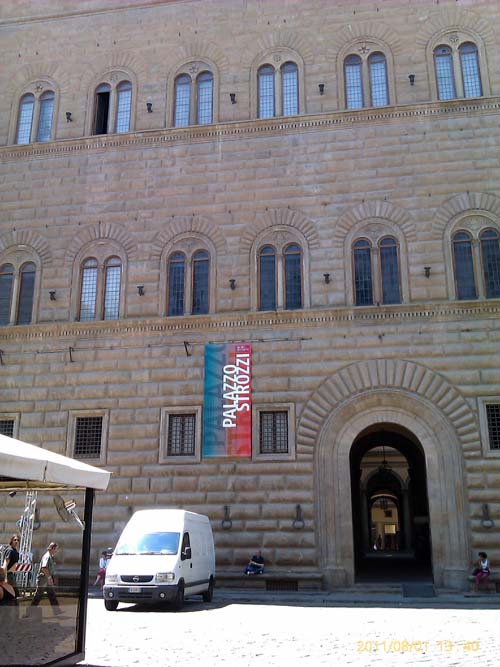 After the excursion we had time for walking around the city on our own. I took my bearings from the map we had been given at the beginning and separated from the group. In Florence, all the buildings were massive and looked like fortresses. Usually there was a small courtyard inside. I went into one. A few people were walking here, obviously tourists too. Nothing remarkable. I walked around and saw a woman come out of one of the doors. 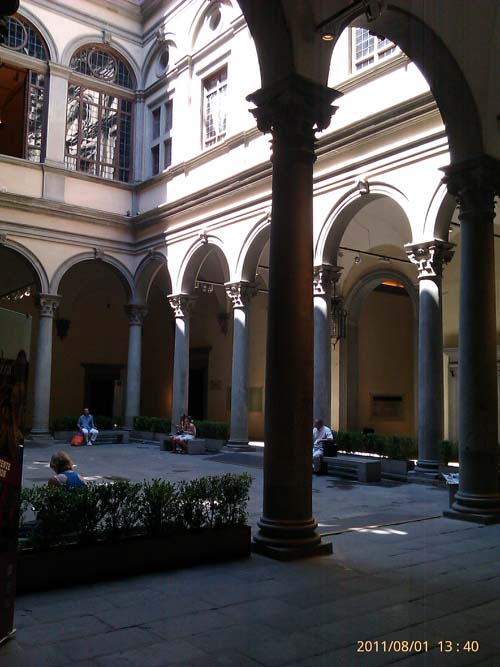 I decided to replay my experience in Venice, going to places not for tourists. More shortly, I walked through that door. There was an elevator. Just for fun, I pressed call. The doors opened and it was a modern, mirrored little elevator. My curiosity lured me inside. I was inside of the elevator; I was standing and looking at the buttons there. The situation was similar to the movie "Matrix" where Neo was asked to choose between two pills: the blue pill makes you to fall asleep and all forget, the red in its turn opens a new world for you. Yes, definitely, my case was not so epic, but the feelings were about the same: "press or not?" After a little hesitation, I pressed the button of the fourth floor. The top of that could happen to me it would be my arrest, and I would be caught - the thoughts occurred my head in that moment during I was going up slowly with the elevator. I went out into the empty corridor. Everything seemed so quiet. Trying not to make a sound, I walked slowly forward. But just as I turned the corner I came upon a woman sitting at a table. Apparently it was some kind of desk. “Excuse me, where are you going?” she asked me in English. I said something to her also in English, but I did not understand myself what I said, so quickly turned and went, with the hope she would stay on the place. But she followed me. There was nowhere to go. I stopped and showed the camera as excuses and asked:
“May I take a photo?” After some thoughts, the woman replied:
"Yes". - and went back to her place.
I stood at the railing, almost at the top of the patio. Below, the same tourists were walking. 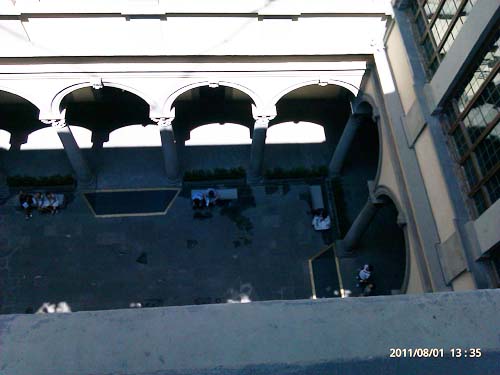 A bit looking around went inside of the buildings. Having gone in some room I saw two women. They sat and were writing something.
"Bongiorno," I said.
"Bongiorno," they said.
I wanted to go on, but they stopped me.
"What's in here?" I asked. One of the women said:
“Library.”

I asked permission for looking, and showed my camera. The two women looked at each other, and one of them stood up and motioned for me to follow. Passing through the room, we entered a room consisting of walk-through rooms. Each of them had modern desks and along the side walls were shelves with some sort of gray, brown books. There was a large painting of the Virgin Mary on one wall. The remaining part of modernity was only small coffee tables. Stone walls and antique shelves created an amazing atmosphere. I looked around, pointed to the old books and asked: “What is this?”

The woman said something, but I couldn't make out a word. Realizing this from my questioning look the woman corrected: “Renaissance”. It was amazing! I stood in the library where the Renaissance books were kept. They were so old. Perhaps there were the works of Dante Alighieri. It's hard for describing all my feelings. It was like I reached into some treasure trove, which was hidden from others. Perhaps this was an ordinary library, but so far hardly any of the tourists came here. I was glad as a discoverer who found a treasure.

Looking out of the window, I saw below people walking around the square and inspecting these houses-fortresses. They did not know how many interesting things were hidden behind these gigantic walls...
Thanking the women, I said goodbye and went to the exit. 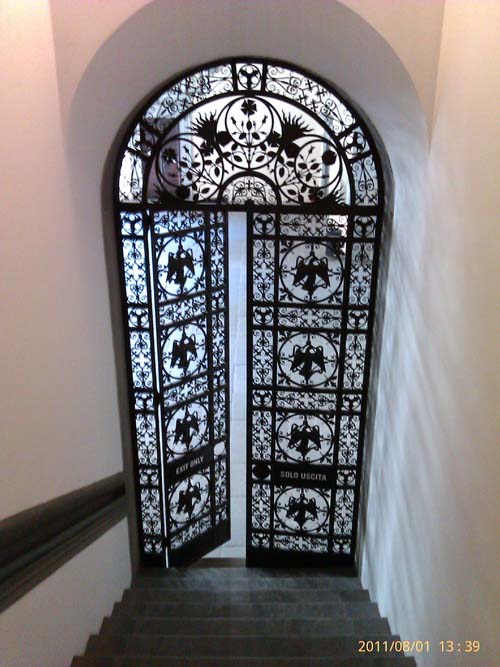 This incident was one of the moments that my memory has kept vividly in my head. If I hadn't been interested in what was hidden, I wouldn't have walked into that little courtyard, and I certainly wouldn't have pressed the elevator button. But everything happened exactly in this way. Fate gave me a gift-the opportunity to realize my desire into my life. Only the choice had to be done: to open the door and to know about what inside of it is or just simply pass go further. Maybe I just only write in a so lively and colorful way but at the same time I wanted to say, if you get an opportunity, use it. Play with fate; take risks, open new doors. It doesn't matter if you're lucky or not. Only important is the experience that you are getting, only feelings that you are surviving! It might be the biggest payoff. You just should have a little courage and take a step... The choice is only yours ;) I think that's enough for today. Thank you for having the patience of reading it all! I wanted to write more about San Marino, but after thinking, decided not to torment boring stories about the tour. I will just post pictures on the website Vkontakte. So I will write about the nightlife in Rimini in the final post and what the Russians are doing there. Follow me and read ;)